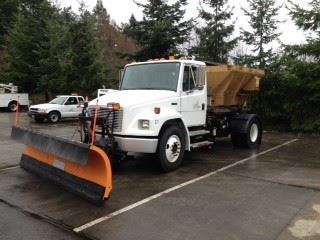 The City uses the following equipment to control snow and ice in the winter:

The City stores approximately 100 yards of sand and three tons of granular deicer in preparation for winter weather events.

During snow events, crews are called in as needed. Four Streets Division crew members and other water, solid waste, wastewater, and water division staff are cross-trained to assist with the snow removal process.

Snow and ice control is accomplished by spreading sand on the roadway or plowing when warranted.

Work to Reduce the Formation of Ice

Applying a deicer substance on the roadway prevents ice formation by lowering the freezing point of water and preventing bonding between ice and paved roads. The same is true for sanding. Putting sand on the roadway improves traction for drivers and makes it harder for the streets to re-freeze.

Snowplows clear snow from roadways by pushing it out of the way of drivers.

Priorities for Sanding and Snow Control

Removal of Snow and Ice from City Facilities

Public Works staff are also responsible for addressing snow and ice removal from public buildings during operational hours to keep the public and City staff safe.